Why Can’t We Predict Earthquakes?

A bad earthquake at once destroys our oldest associations: the earth, the very emblem of solidity, has moved beneath our feet like a thin crust over a fluid; – one second of time has created in the mind a strange idea of insecurity, which hours of reflection would not have produced.
Charles Darwin’s description of the 1835 Concepción (Chile) earthquake 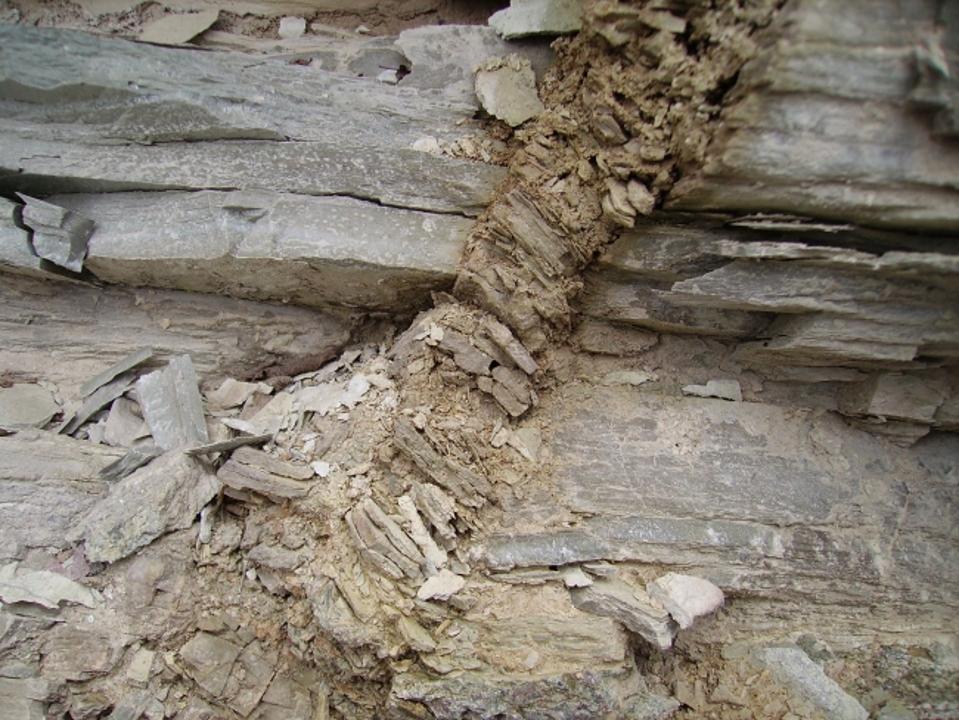 A small fault cuts trough horizontal sedimentary layers in the mountains of Serbia.

There is currently no way to reliably predict when an earthquake will happen, its strength or length. Earthquakes can vary in their magnitude, the size of the earthquake at its source, and length, lasting from seconds to minutes.

Research has shown, that shaking of an earthquake displays a characteristic pattern. After the first tremors start, building up in intensity, a peak is reached, followed by a fading shaking. Large and small earthquakes start the same way, but there is no way to say when the peak, the maximal magnitude of the quake, is reached.  An earthquake is generated by a sudden rupture of rocks in the underground, miles below the surface, driven by forces even deeper inside planet Earth. It’s very hard to exactly understand how rocks behave under the increased pressure and temperature found there. Experiments in the laboratory are limited to relatively small samples and drilling into fault zones is a difficult, and very expensive, operation.

To predict an earthquake we would need unequivocal precursory signals. In the past seismologist noted before earthquakes some changes in the environment, like an increase in radon gas concentrations, changes in electromagnetic activity, foreshocks, measurable ground deformations, geochemical changes in groundwater and even unusual animal behavior.

Some earthquakes were preceded by changes in the groundwater level. As tectonic stress builds up, rocks can develop micro-fissures, changing the permeability of the rocks for water. Also, the hydrochemistry of springs can change, as rocks are crushed by the accumulating tension, leaking chemicals into the groundwater, or changing the flow patterns of the water in the underground.

Radon, a gas formed by the radioactive decay of elements present in certain minerals, can show fluctuations before an earthquake. It was used in the past to predict earthquakes, but it’s not clear how radon concentration and earthquakes could be connected. Maybe the micro-fissures, developing in the rocks before the main rupture along a fault occurs, change the permeability of the underground and the gas escapes to the surface, where it can be detected.  Despite claims of success before the earthquake of L’Aquila, Italy, in 2009, most scientists remain skeptical of this method. High radon concentration can be produced also by landslides, crushing rocks, or chemical reactions in the groundwater.

Some crystals and rocks will emit electromagnetic energy if put under great pressure. By measuring the electromagnetic field of an area, so the theory, it should be possible to measure the accumulating deformations of the ground. Before the breaking point of the rocks is reached, scientists could give a warning of an impending quake. A similar approach is used measuring foreshocks. As the number of smaller foreshocks increases over time, it could mean that the ground is ready to snap for the big one.

Since antiquity, there exist stories about unusual animal behavior before an earthquake. Even if modern research is pursuing this possibility, the behavior is in general to unreliable for any exact forecasts.

Unfortunately, all the studied signals occur erratically. In some cases, earthquakes were preceded by one or few changes. In many other cases, no particular signal was ever observed,  despite a disastrous earthquake occurring thereafter. At the moment we can’t even be sure if such precursory signals even exist.